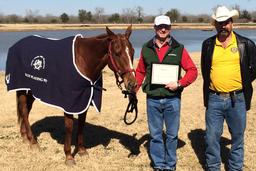 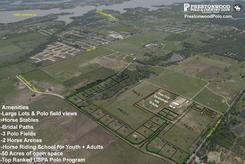 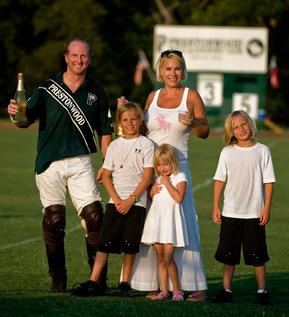 Polo is all about horses.  At Prestonwood we love our horses and pride ourselves on our wonderful strings of advanced, intermediate and beginner horses and have been awarded Best Playing Pony String 4 times by the USPA. 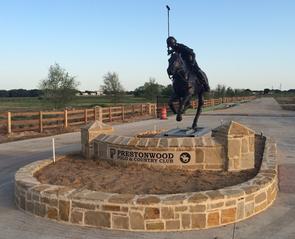 Prestonwood Polo & Country Club is the premier polo club of North Texas. Located on 97 acres of pristine real estate north of Dallas in Oak Point, between the cities of Frisco and Denton. Prestonwood has 3 berumda grass fields, 2  arenas, 48 covered stalls, 3/4 mile track, bridal paths, turn-out pasture and 22 home lots two and half acres each with breathtaking views of the polo grounds. Established in 2008, Prestonwood is the largest member club in North Texas and one of the largest in Texas, thanks in large part to its successful Interscholastic and Intercollegiate programs, referred to as "I-I".

Polo is played year-round at Prestonwood, unlike other clubs in Texas, we don't shut down in the off season.  We play on

our outdoor grass fields in Spring, Summer and Fall; in the Winter months we play arena polo in our full-size regulation polo arena and lighted arena for nighttime play.  We offer Saturday League polo in the Spring and Sunday League polo in the Fall, in addiiton to with weekday practice chukkers year-round.

Our youth polo I-I program is one of the most successful in the country, including 2016 & 2019 National High School Championships, 2015 National Runners-up and 5-time Central USA Champions, in addition we are home to the TCU and UNT Intercollegiate polo teams.

Our Saturday polo is a fan favorite, matches are played in the Fall and Spring and open to the public. We host 2 major charity events each year: Polo on the Lawn Kentucky Derby day in the spring and Polo on the Midway 380 Guide Cup in the Fall.  Tickets may be purchased on-line, check our Event schedule for details.

We offer 2 levels of Saturday League polo: Competitors League for advanced players (2-8 goal) and Margarita League for beginners (0-2 goal). Both leagues give players an opportunity to play with our National Championship players and include weekday practice chukkers.  Contact us about joining our polo program.

Prestonwood Polo Club was launched in 2008 to create a family-friendly club with the goal of sharing their love of polo with the Dallas/Ft. Worth area.  Prestonwood was charted with the United States Polo Association in 2008 and today is the largest USPA member club in North Texas.  Prestonwood also uses polo to raise money for worthwhile causes through polo events, te foundation's goal is to grow the sport of polo by bringing in new players and teaching existing ones to get better in a friendly competitive environment devoid of politics.

When Prestonwood first opened to the public in the Fall of 2008 it was featured on the cover of the 380 Guide magazine for  Denton county.  The next weekend was like a scene out of Field of  Dreams as the cars poured in to see the

that time Prestonwood has been hard at

work expanding the club, buying adjacent property and adding improvements. Prestonwood has grown leaps and bounds since that time,and the club' goal is to build it into a world class polo & equestrian development.

The Miller's have ambitious long-term plans
for the the polo club, including building a new state-of-the-art 100-stall barn with classrooms and viewing areas, a covered horse arena, country club clubhouse & spa facilities with restaurant, retail and meeting space, and adding other equestrian disciplines:

Their goal is for Prestonwood to be one of the best all-around equestrian developments in the world, with beautiful homes where people want to live and play!