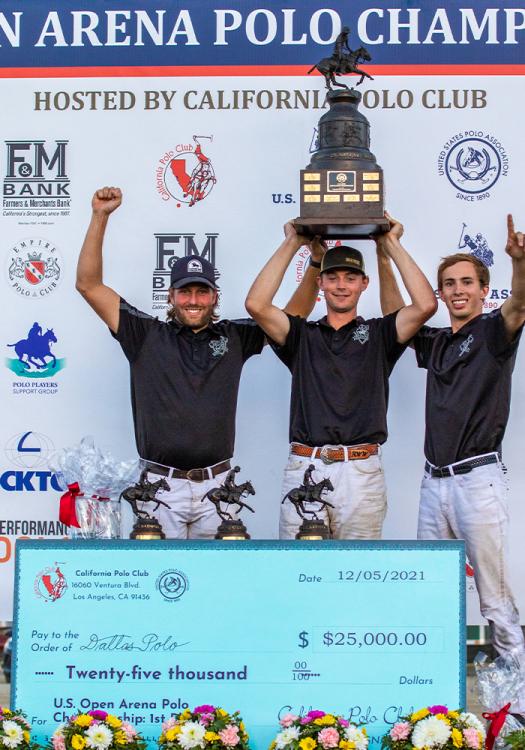 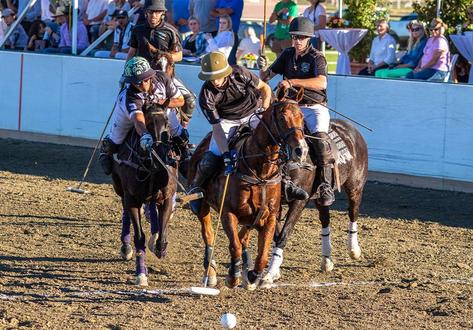 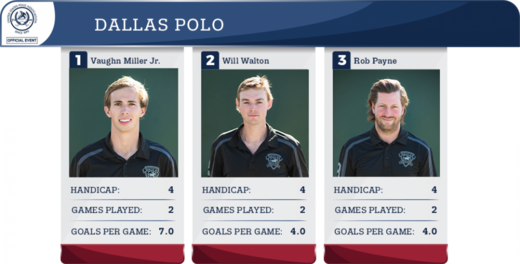 Vaughn Miller Jr currently rated 4-goals indoor won the US Arena Open.  Comprised of three top players from Dallas-Fort Worth area clubs, Prestonwood (Oak Point, Texas), Willowbend (Little Elm, Texas) and Dallas (Red Oak, Texas), the tournament allowed Walton the opportunity to reunite with his 2018 National Youth Tournament Series (NTYS) Championship® teammate Miller Jr. Leaning on their previous chemistry but with only three practices under their belt before the tournament, Dallas Polo trusted their instincts to pull them through.

“Will [Walton] and I have played so much arena polo and Rob’s a veteran,” Miller Jr. said. “We were able to come together with ideas and find the best one for our team.” Crucial to the strategy was containing Escapite, as stressed by Payne, “Pelon [Escapite] is such a strong and respected arena player. We had to focus in on him for most of the game.”

Strategically neutralizing Escapite proved effective in the second chukker as Miller Jr. tapped in a goal, followed by Walton with a successful two-pointer. As BOOM! Cult trailed for the first time in the tournament, Escapite was able to create some space on a pass from Nordheimer to find the goal. After receiving a goal on a Penalty 1, BOOM! Cult leveled the scoreboard. Continuing to play as a cohesive unit, Dallas Polo took charge of the remaining time in the half. After two quick goals in succession from Payne, Miller Jr. was able to tap in his second of the chukker. Scoring three goals within forty seconds, the offensive blitz from Dallas Polo allowed them to take a 8-4 lead into halftime.Returning for the first time since 2018, the prestigious U.S. Open Arena Polo Championship® featured six competitive teams vying for the title in one of the premier arena polo competitions in the United States. Featuring $50,000 in total prize money as part of the USPA’s Tournament Prize Money Matching Program, the 12- to 14-goal tournament was hosted by California Polo Club (Los Angeles, California) for the first time since 2011, with games played at Empire Polo Club (Indio, California).


The semifinals were played in a round-robin format with BOOM! Cult, led by arena veteran Escapite, utilizing their experience and practices earlier in the week to take both of their respective matches over 101 Polo Club (Johann Felhaber, Jason Crowder, Dan Flaherty) and Paragon (Patrick Uretz*, Troy Crumley, Jimmy Wright*, sub. Tomas Obregon, sub. Vance Miller III) to advance into the final undefeated.