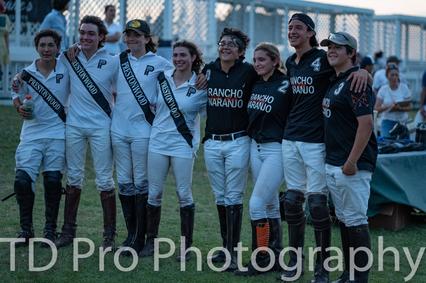 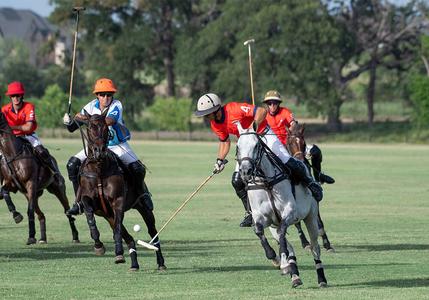 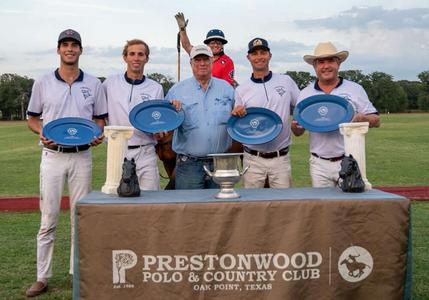 Prestonwood wraps one if its most successful spring seasons

The first weekend of play set the stage for the entire tournament. In a precursor to their showdown in the finals, the kickoff match pitted Tiburón against Celebrity Cruises. In this game, however, Tiburón lead until the final moments, when Nachi Viana stole the ball off a broken knock-in and slammed it through the uprights to narrowly nab the win for Celebrity Cruises, 7-6.5.

Play resumed on Saturday, June 11, with both Gusto battling Tiburón and Drakes fighting Celebrity Cruises. Tiburón first delivered a decisive 9-4 win over Gusto with Wroe and Miller Jr. feeding off of each other’s energy to both find the goal on multiple occasions. In the following match, Celebrity Cruises kept their winning streak alive and pushed their record to 2-0 with another narrow victory, edging out Drakes 7-6.

The tournament picked up again on Thursday, June 16, with semifinal play. The first match found Tiburón and Drakes meeting again, this time with a spot in the finals on the line. Both teams hungry to capture a place on the field for Saturday’s finals, the game came down to the last few seconds, when Felipe Viana raced down the field in an attempt to overtake the Tiburón lead, but the clock wound down before he could find the goal. As the final horn blared, Tiburón clung on to a 0.5-goal lead triumphing over Drakes, 4.5-4.

In the second semifinal match, Gusto was forced to face the undefeated Celebrity Cruises. Having already qualified for the final based on their record, this game was more of a practice run for Celebrity Cruises, which they would use to incorporate some of their substitute players. Escapite’s strong spirit and dextrous play ultimately gave Gusto their first win of the tournament, prevailing over Celebrity Cruises by 0.5 goals, 6-5.5.

After six games filled with intense competition, Saturday, June 18 served as the final showdown, with Tiburón and Celebrity Cruises meeting in a rematch of the tournament’s very first game. Determined to force an alternate, more positive outcome for their team, Tiburón flew onto the field firing on all cylinders. Wroe blasted two goals through the uprights in the first chukker to give Tiburón an early lead. But by halftime, Nachi Viana and Espinal had combined forces to bring Celebrity Cruises back into the game, now behind by only 0.5 goals.

With only a 2.5-2 lead, Wroe was eager to create a larger deficit in the third chukker. Executing a stellar give-and-go strategy, Miller Jr. and Wroe worked together to make magic happen, ultimately resulting in another Tiburón goal. Miller Jr., looking to seal the win as time ran out, was able to find the goal one more time to turn the tables on Celebrity Cruises and take the victory, 4.5-2.

Tiburón's Mason Wroe on a breakaway.
Proud of his team’s ability to find success, Miller Jr. shared his team’s strategy going into the finals, saying, “In our first game, we allowed Nachi to run rampant on us. The plan for the rematch was for me to focus all of my attention on him and try to get Mason alone with the other players. Niklaus Felhaber improved every game, as it was his first 8-goal tournament, and he came up huge by helping me with Nachi and giving Mason time with the ball. Collen Clark also was a master at the back position and didn’t let anyone through.”

For his impressive defensive efforts that created several scoring opportunities for his team throughout the tournament, Niklaus Felhaber was named Most Valuable Player.

Wroe commended his teammate’s performance in the final, sharing, “Niklaus Felhaber played an outstanding game. He really rose to the occasion, he showed attitude, determination, speed, quickness; he brought all those things to the final…I was really happy and proud of him for his performance and the way he handled himself.” Respeto, owned by Miller Jr. and played by Nachi Viana, was awarded Best Playing Pony honors.

Nachi Viana on Best Playing Pony Respeto, Most Valuable Player Niklaus Felhaber close behind.
A fun, friendly and competitive tournament, Miller Jr. added, “Prestonwood is a family-operated club and it was an honor to host an 8-goal USPA tournament with superstar players such as Felipe Viana, Pelon Escapite, Nachi Viana and Mason Wroe. Every game went down to the wire and every player left with a smile. The whole club won in my book.” 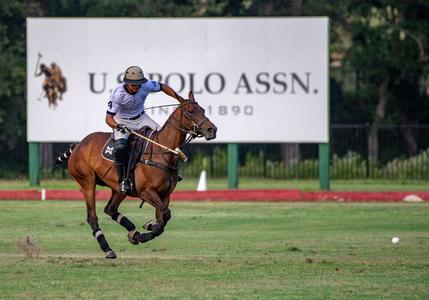 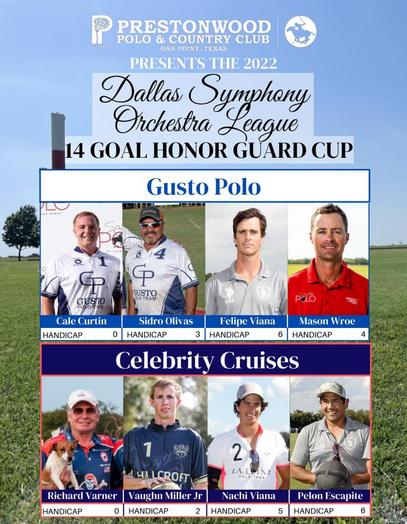 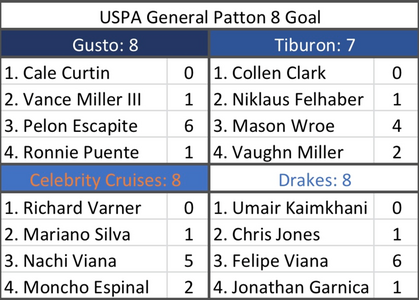 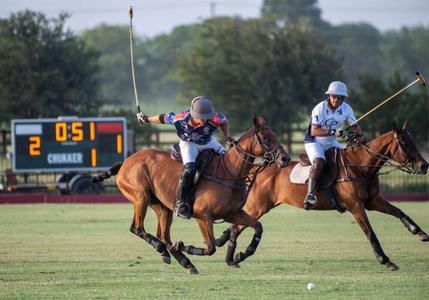 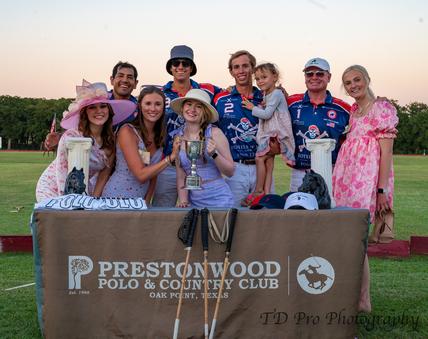 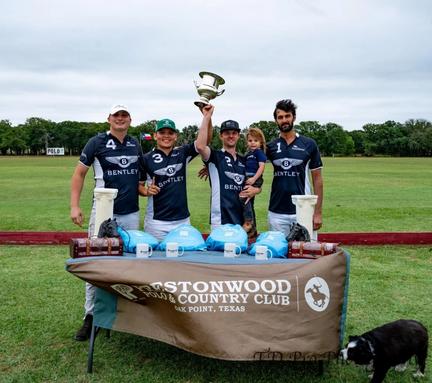 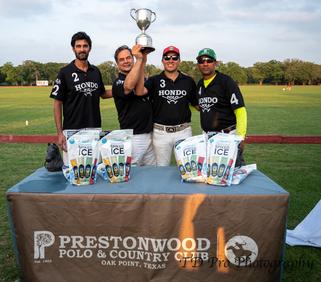 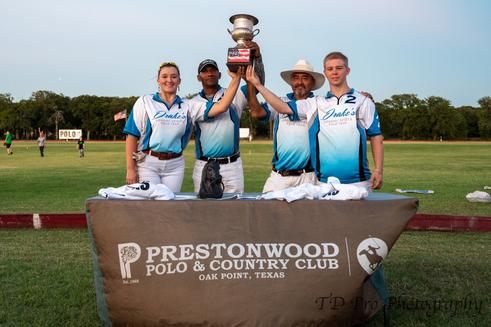 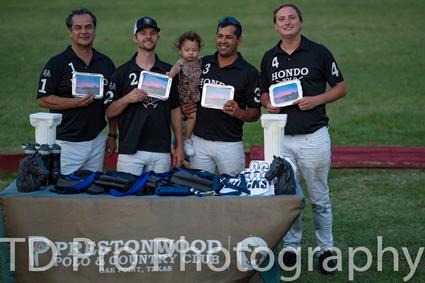 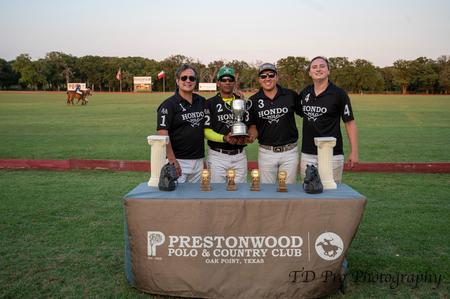 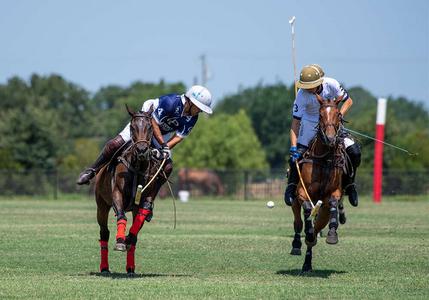 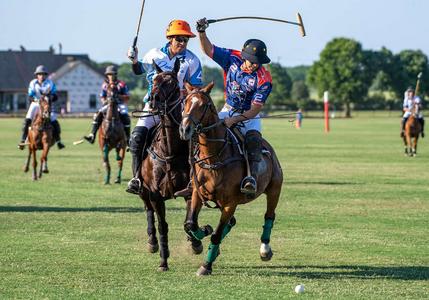 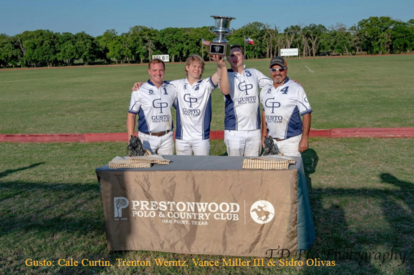